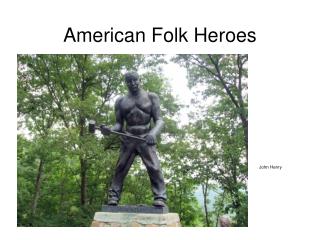 Outlaws as Heroes - . our desperate need to make bad-guys not so bad. thinking first: what is a 'hero'? what is a

African-American Folk Tales - . african-american folk tales originated with peoples who were brought from africa against

Paul Bunyan - . paul bunyan is a 19 th century american tall tale about a logger with unbelievable strength and size. he

Native American Artists By Harold Paul - . welcome to my presentation on native american artists. indian art is by nature

Tall Tales - . tall tales. what is a tall tale?. a tall tale is a fictional story that stretches the truth. the heroes or

Folklore - . the american folk tradition. what is folklore?. any of the beliefs, customs, and traditions that people pass

Folklore - . the american folk tradition or oral tradition. definition of folklore…. folklore grew out of the oral

Revolutionary War Heroes - . objective. by the end of this mini-lesson you will be familiar with some important heroes of

Folktales - . a folktale is a story that was told by generations of storytellers before it was ever written

Folktales - . a folktale is a story that was told by generations of storytellers before it was ever written