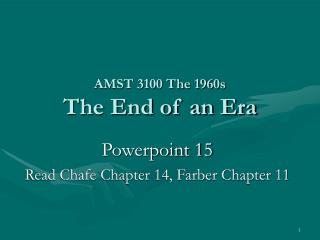 AMST 3100 The 1960s The End of an Era. Powerpoint 15 Read Chafe Chapter 14, Farber Chapter 11. The End of the 60s. By the late 60s, the Vietnam War had become a prism of American society: it revealed a society divided deeply over war and over cultural values. When did imperialism occur? - . how does your response depend upon how you define imperialism?. your definition is…?.

The Outsiders 1960s PowerPoint - . directions:. rubric:. you and a partner will research the 1960s. you will create a

CAREER PREPARATION AND PROFESSIONLISM CRSS 3100 (Topic #1) - . why did you enroll in this course?. success, how is it