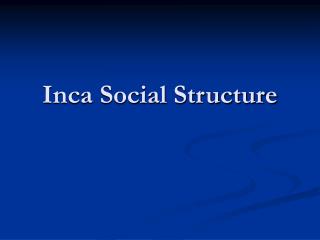 Inca Social Structure. Inca Development. The beginning of the Inca rule started with the conquest of the Chimu Culture in Peru. The original Inca tribe was a minor Andean tribe whose expansion began with a successful campaign against its more powerful neighbours, the Chancas, in the 1440s. .

Incan Empire - . inca empire. inca development. the beginning of the inca rule started with the conquest of the chimu

THE INCA - . the indigenous people of the americas – pre-columbian settlements. overview. the inca controlled a large

The Expansion of the Inca Empire - . original information from tci modified by stephanie andrews and stephanie bohn.

Inca Empire Introduction - . what do you know about the civilization in perú conquered by the spanish conquistadors?.

Inca Civilization - . while the aztec empire grew in mexico, another powerful empire was taking shape in south america.

The Inca - By: isabella morasco. the inca. the inca. 1. inca houses. lived in simple houses only 1 main room very little

Social Structure - . building blocks of social structure. what guides our interaction. society as a structure status

The Inca Tribe - . by: sivan klapholz. basic tools to live. the inca tribe was not an ordinary tribe;the tribe had a

Social Interaction and Social Structure - . chapter 5. why should we choose these guys?. i. social structure = . ***