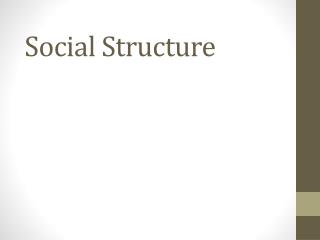 Social Structure. Social Structure. The underlying patterns of relations in a group. We carry a “social map” for situations that we have learned . Components: Culture social class social status Roles Groups social institutions Social Cognition - . chapter four. social cognition. to what extent do we behave like we are superstitious, simpleminded,

The Duality of Structure - Introduction. introduce students to anthony giddens' theory of social structuration and his