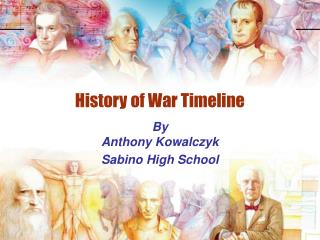 History of War Timeline By Anthony Kowalczyk Sabino High School Peloponnesian War 431-404 B.C. Athens and Sparta were both powerful city-states in Greece, and each wanted to spread their way of life.

Timeline of History - . the cell. cell theory. all living things are made up of cells (organisms are either

History Timeline - . created by : t.d. 500,000 b.c. fire was discovered it was needed for the spread of civilization it

History of Earth Timeline - . 4.6 bya to present. the hadean eon. from the greek word hades referring to the hellish

Timeline Of Computer History - . by: lily du . the

Timeline of Canada’s History - . pros and cons of quebec seceding from