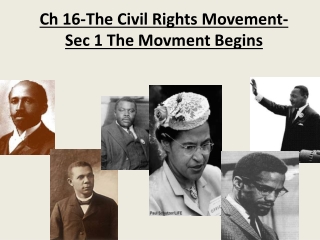 Ch 16-The Civil Rights Movement- Sec 1 The Movment Begins. Essential Questions:. How had legalized segregation deprived African-Americans of their rights as citizens? How did WWII experiences lay the foundation for the movement ?

Teaching and Admonishing - . what we learn from psalms, hymns and spiritual songs colossians 3:16. why study hymns?.