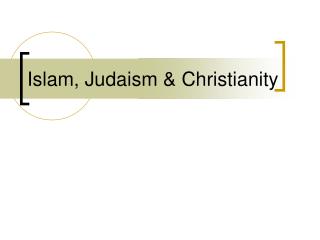 THE SPREAD OF RELIGIONS - . movement in world history. the spread of buddhism. the original jewish diaspora. expulsions

Major World Religions: Pick 3 ?s below to answer - . why do people practice religion? why is religion significant in some

Intro to World Religions - . why is there religion?. paint by french artist paul gauguin title: where do we come from?

Reincarnation in World Religions - . “rebirth is an affirmation that must be counted among the primordial affirmations

Learning About World Religions:  Hinduism - . introduction. in this chapter, you will learn about the origins and

History and Religions of the Middle East - . early civilizations, centuries of turmoil, and islam, judaism, christianity.

The Common Threads of the World Religions - . what is . ?. the word religion  comes from the latin  word  ligare : to

Introduction to Eastern Religions - . eastern religions have their roots in hinduism. buddhism – the buddha (who