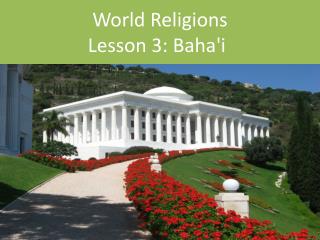 Comparitive Theology and World View of Christianity and World Religions - . key theological questions. what is the nature

ABRAHAMIC RELIGIONS - . islam is an abrahamic religion or judeo-abrahamic faith, like judaism and christianity (and

Learning about World religions: Hinduism - . the ancient traditions that gave the rise to hinduism has affected the way

The Theosophical Society in Israel Many religions One God - . the story of an interreligious convention may 2011 at neve

Assignment on 2-26 - . faith and religion. as ways of knowing. what is religion?. religions are systems of values,

Universalizing religions The big 3 Christianity, Islam, Buddhism - The attempt to be global and appeal to all people no

Studying Religion - . unit one – hrt 3m. computer time. using the computers you are to answer all of the questions from

Relation between Baha’i Faith and Israel - . this presentation on baha’i-israel relationship shall be an eye-opener

Theories on the Origin of Religions - . by mr. hill. theory one: animism. herbert spencer (1850s) - manism the gods of