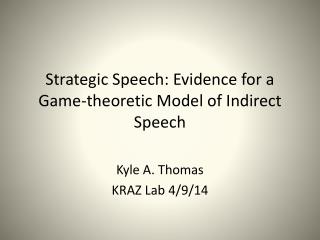 Strategic Speech: Evidence for a Game-theoretic Model of Indirect Speech Strategic Speech: Evidence for a Game-theoretic Model of Indirect Speech. Kyle A. Thomas KRAZ Lab 4/9/14. The Initial Puzzle. We don’t communicate like computers. How Do We Understand Each Other ? . Grice’s Cooperative Principle: C onversation partners’ cooperate to convey meaning

Strategic Speech: Evidence for a Game-theoretic Model of Indirect Speech

Boston Rival Rallies: Thousands march against hate speech - Thousands of people took to the streets of boston to protest

Eight Parts of Speech Review - . from the word given, identify what part of speech it is. . sorrowfully. adverb. fish.

Parts of Speech - Introducing…. parts of speech. click on the arrow to go to the next slide. introduction. every word