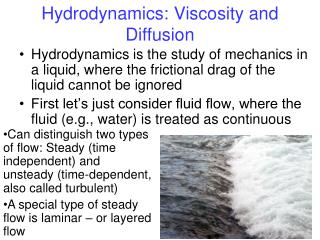 Hydrodynamics: Viscosity and Diffusion. Hydrodynamics is the study of mechanics in a liquid, where the frictional drag of the liquid cannot be ignored First let’s just consider fluid flow, where the fluid (e.g., water) is treated as continuous. ME 575 Hydrodynamics of Lubrication - . by parviz merati, professor and chair department of mechanical and aeronautical

CHAPTER 5: DIFFUSION IN SOLIDS - . issues to address. • how does diffusion occur?. • why is it an important part of

Osmosis &amp; Diffusion - . diffusion. * the movement of molecules from an area of high concentration to an area of

VISCOSITY - . the resistance of material to flow the higher the viscosity, the less easily something (magma/lava) can

Perfect liquid at RHIC! Problem: all fluids have viscosity. - With abdel-aziz in progress. how can we measure viscosity?

Chapter 11: Diffusion - . diffusion. diffusion refers to any process in which a substance or property spreads from one

Chapter 4 - . viscosity. what do melting chocolate, pancake syrup, ketchup, and ice water have in common? they are all

Properties of Magma - . the physical property of a liquid is called viscosity. viscosity is the resistance of a liquid to

CHAPTER 6: DIFFUSION IN SOLIDS - . issues to address. • how does diffusion occur?. • why is it an important part of