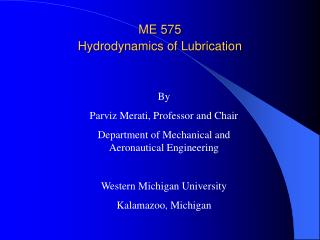 ME 575 Hydrodynamics of Lubrication

ME 575 Hydrodynamics of Lubrication

CHAPTER 16 LUBRICATION SYSTEM OPERATION AND DIAGNOSIS - . objectives. after studying chapter 16, the reader should be

CHAPTER 9 Lubrication System Operation and Diagnosis - . objectives. after studying chapter 9, the reader will be able

Manual Transmission Diagnosis - . lubrication. most manual transmissions are lubricated by the splay and spray method

Erection , Lubrication, and Orgasm - . where is erectile tissue located? once these tissues are stimulated,

Hydrodynamics in Porous Media - . we will cover: how fluids respond to local potential gradients (darcy’s law) add the