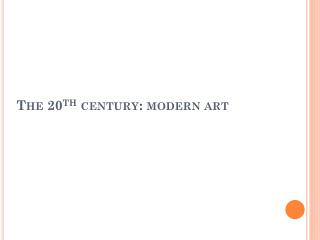 The 20 th century: modern art. Introduction. “ Beauty must be convulsive or cease to be,” said Surrealist spokesman André Breton Art concerned itself less with exterior visual reality and more with interior vision The artist paints “not what you see, but what you know there is” (P. Picasso)