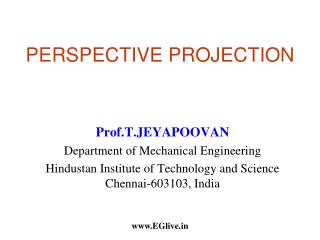 PERSPECTIVE PROJECTION. Prof.T.JEYAPOOVAN Department of Mechanical Engineering Hindustan Institute of Technology and Science Chennai-603103, India. Perspective Projection. Perspective projection is used to draw the three dimensional picture of an object as it appears to the human eye.

The Camera and Perspective Projection - . the camera has an eye ( or view reference poin t vrp ) at some point in

PROJECTION SYSTEMS - . module 4. filmstrip projector. it is a device used to view a filmstrip. the term filmstrip refers

Stereographic Projection - . equator plane. stereographic projection i. 1. place the crystal in the center of a sphere.