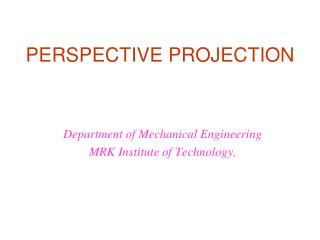 PERSPECTIVE PROJECTION. Department of Mechanical Engineering MRK Institute of Technology,. Perspective Projection. Perspective projection is used to draw the three dimensional picture of an object as it appears to the human eye.

The Camera and Perspective Projection - . the camera has an eye ( or view reference poin t vrp ) at some point in

PROJECTION SYSTEMS - . module 4. filmstrip projector. it is a device used to view a filmstrip. the term filmstrip refers

Stereographic Projection - . equator plane. stereographic projection i. 1. place the crystal in the center of a sphere.