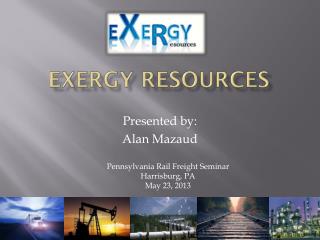 EXERGY - . real-time efficiency analysis for power stations. the issue. you need the ability to detect and diagnose

Exergy - . exergy. the maximum amount of work that can be extracted from a system at a given state in a specified

EXERGY - . basic definitions exergy : is property used to determine the useful work potential of a given amount of energy

Exergy Balance for Control Volumes - . most control volume devices are steady flow. if it is reversible, then w = w rev