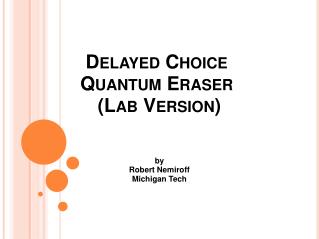 Quantum Mechanics: - . the sequel . quantum numbers. read on pg. 200 from “the theory of quantum…” (about third

Introduction to Quantum Computation - . andris ambainis university of latvia. what is quantum computation?. new model of

The Blind Men and the Quantum: Adding Vision to the Quantum World - . john g. cramer dept. of physics, univ. of

Quantum Computers - . by robert green. what is a quantum computer?. a device that uses quantum physics uses the power of