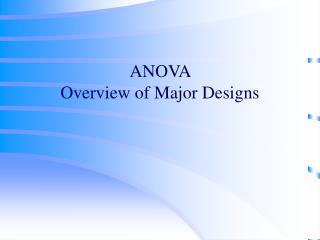 ANOVA Overview of Major Designs. Between or Within Subjects. Between-subjects (completely randomized) designs Subjects are nested within treatment conditions By nested we mean that subjects are observed under only a single condition of the study Within-subjects (randomized block) designs

Creative Eye Logo Design - In this post we have added 40 best eye themed logo designs for your inspiration. eye logo

Major Hazard Facilities - . preparing and managing a safety report. overview. the seminar has been developed to provide:

Design - . xiaojun qi. data and actions. two aspects of a product actions that operate on data data on which actions