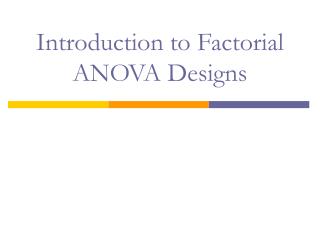 Introduction to Factorial ANOVA Designs. Factorial Anova. With factorial Anova we have more than one independent variable The terms 2-way, 3-way etc. refer to how many IVs there are in the analysis The following will discuss 2-way design but may extended to more complex designs.

Creative Eye Logo Design - In this post we have added 40 best eye themed logo designs for your inspiration. eye logo

Introduction to Biomimicry - . where do ideas come from?. biomimicry. bio – life mimicry – copy or emulate the

Brief Introduction to Verilog - Weiping shi what is verilog? it is a hardware description language allows designers to

Factorial Designs - . more than one independent variable: each iv is referred to as a factor all levels of each iv