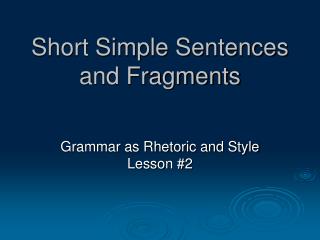 Short Simple Sentences and Fragments. Grammar as Rhetoric and Style Lesson #2. Definition. A simple sentence, strictly defined, has a subject and verb: it consists of one independent clause.

SENTENCES - . the power of writing. sentence. a sentence is a word group that contains a subject and a verb and that

SENTENCES - . kinds of sentences fragments subjects and predicates simple and compound. what is a sentence?. a sentence

Simple sentences - . definitions. sentence: a group of words that expresses a complete thought. every sentence has a

Chapter 19: Avoiding Sentence Fragments - . a sentence fragment is a group of words that might look like a sentence and

Combining Sentences - . also referred to as simple sentences contain the most basic elements needed to make a sentence.

Complete Sentences and Sentence Fragments - . since he came to new york . because my dog loves it. unless you see me . is

SHORT SIMPLE SENTENCES &amp; FRAGMENTS - . grammar. what is a “simple” sentence?. strictly, it has a subject and

Fragments vs. Run-On Sentences - . claire brownstone. fragments. a sentence fragment is an incomplete sentence. they lack

Run-on Sentences, Comma Splices and Sentence Fragments - . what kind of sentence is