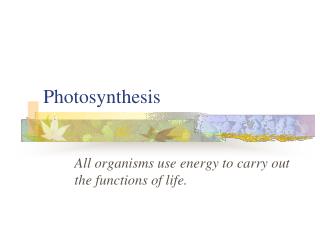 THIS - . is. biology jeopardy. your. with. host. mrs. jenkins. jeopardy. my toes my o’es. fo’ shizzle my

INTERRELATIONSHIP IN THE ECOSYSTEM - . the environmentalist. question index. click on a question number to select it. 1.

Molecular Biology - . elements present in your body other than water…. carbon-30% of all biomass, original source of c

Review for Photosynthesis and Cellular Respiration - . the main product of the calvin cycle is. nadph oxygen glucose