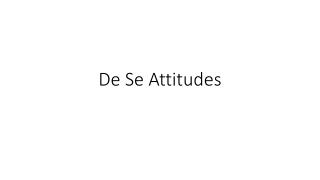 Don’t Blame God - . james 1v13-21. our father, we thank you for every way you have spoken to us through your word. we

Attitude Formation and Change - . what is an attitude?. a learned predisposition to respond to an object or a class of

The Contractor S.A.L.E.S. Course - . s kills and a ttitudes that l ead to e xceptional s elling. why sales training?.