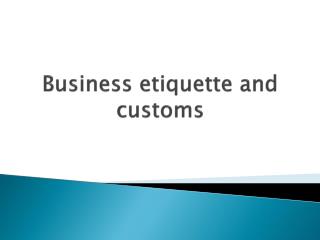 Business etiquette and customs. Introduction. In China, Mr./Ms. should be added to last name. In the U.S., first names are used almost immediately right after the introduction. Introductions are often accompanied by a relative soft, lengthy handshake or a nod in China.

The Islamic Etiquette of Clothing

DINING ETIQUETTE is GOOD BUSINESS - . (and it can be fun if you know what you’re doing)!. dining etiquette. where to

Bathroom Etiquette - …what you should know… #1…wash your hands! self explanatory…germs are spread through

ETIQUETTE &amp; MANNERS: Social rules for the professional Compiled by Dotty Harshberger - . no matter what the

F estivals and their Traditions in Great Britain - . * to develop speaking, reading, writing, listening skills; * to