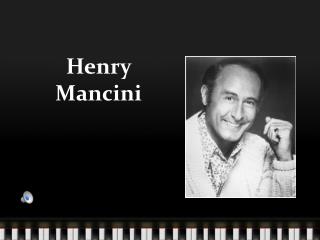 Henry Mancini. Composer of many unforgettable films Winner of multiple awards including Grammys and Oscars. PART I: BIOGRAPHY Early Life. Mancini was born April 16, 1924. He learned the flute and the piano at 8. Graduated high school in 1942. Attended Julliard in 1942 to 1943. Go Back in Time with Music You Love - The years may have quickly gone by, but that doesnâ€™t mean you canâ€™t

By: Tiffany Adams - . *born in 476 a.d., in kerala. *a renowned mathematician and astronomer of ancient india. *studied Music 1010 - . semester presentation by sarah caverni. pyotr ilyich tchaikovsky . the life and music of an amazing