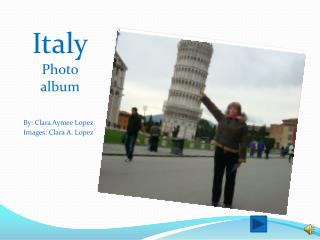 Italy Photo album . By: Clara Aymee Lopez Images: Clara A. Lopez. Italy offers a remarkable kaleidoscope of regions and experiences for all visitors. . Photo Album - . 20 – 22 september 2013. this photo album contains photos taken on our weekend in support of all our

TAKE PHOTO - This is a a test of sony digital mavica’s latest microchip technology. with this new system we can convert

Photo Album - Computer network topologies. photo album. by me. - manisha rajput. what is a topology ?. • network