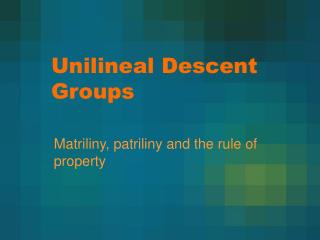 Unilineal Descent Groups. Matriliny, patriliny and the rule of property. Combinations of descent rules. Lineages and clans: lineages are defined as kin groupings in which direct descent is known, often goes back to a great-great grandparent.

Commercial Vehicle - . program overview. what do we write?. farmers has elected to pursue three major groups of vehicles

DESCENT WITH MODIFICATION: A DARWINIAN VIEW OF LIFE - . chapter 22. fossils of trilobites, animals that lived in the seas

NTFS, Users, and Groups - . chapter 16. overview. in this chapter, you will learn how to create and administer windows

Dietary Requirements for Different Client Groups - . lisa m. hanna-trainor. learning outcomes. be aware that there are a

Chapter 10- Interest Groups - . (1). define what an interest group is, and contrast its functions with political parties