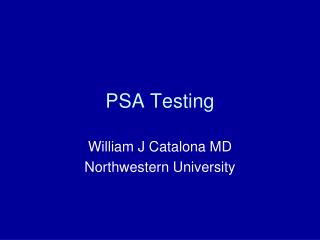 PSA Testing 101 - I am indebted to eric klein, md and the prostatenet for providing some of the materialsin the following

PSA - . public service announcement. psas try to persuade their viewers to take a specific action or to adopt a favorable

PROSTATE CANCER - Is there a role for adjuvant/neoadjuvant chemotherapy in high risk prostate cancer? giuseppe procopio