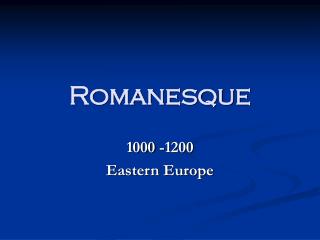 Romanesque - . the age of pilgrims and crusaders part two-sculpture. sculpture. the revival of stonecarving is one of the

Romanesque 3: What is Romanesque Style? - . iii. design on and off the pilgrimage route: spain. the first romanesque.

Romanesque Art - . expansion &amp; economic revival “build it (block by block) and they will come”. 1. the

Romanesque Period - . 14.2 . the romanesque period . romanesque art of the early medieval period that began to take on