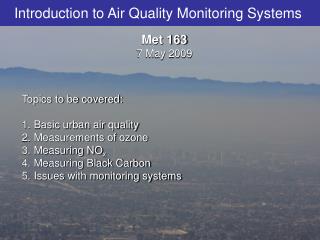 Introduction to Air Quality Monitoring Systems. Met 163 7 May 2009. Topics to be covered: Basic urban air quality Measurements of ozone Measuring NO x Measuring Black Carbon Issues with monitoring systems. What is in Urban Air?. O 3 , NO, NO 2 , CO, CO 2 , SO 2 , HCHO.