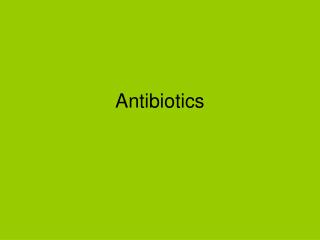 Week 2 outline - . pharmacokinetics: how drugs are handled by the body overview followed by details!!. lets say you have

Parts of the Puzzle - . ibr at work. the role of antibiotics in treating diseases caused by different bugs … focus on

Antibiotics - . antibiotics. antibiotics are large group of the drugs, which can inhibit selectively growth of bacteria,

Principles of antibiotic therapy in paediatrics - . dr. györgy fekete. antibiotics 1. what is the reason? indication?

Antimicrobial Drugs - . chemotherapy : use of chemicals that do not harm the host yet kills others. chemotherapeutic