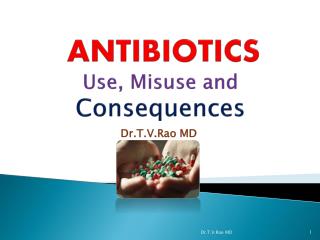 Antibiotic misuse threatens all our futures… - . irish schoolchildren design their own superbugs to remind you to only

Antibiotics - . why we must use them wisely!. &lt; insert presenter details &gt; antibiotic awareness week 2014

Antibiotic Resistant Microorganisms - . should we be concerned?. the story of a. baumanii , a.k.a., iraqibacter, and

ANTIBIOTICS - . how do we usually fight bacteria, naturally? 2) differentiate between bactericidal and bacteriostatic ?

Bacterial Responses to Antibiotics in the Upper Susquehanna River - . what we did with your money during our summer

Antibiotics - . slackers facts by mike ori. disclaimer. the information represents my understanding only so errors and

923 Effect of Interventions on Misuse of Antibiotics/Antibacterial Drugs in Developing Countries: a Systematic Review

CHALLENGES IN REGULATING QUALITY AND RATIONAL USE OF ANTIBIOTICS - . alliance for the prudent use of antibiotics: