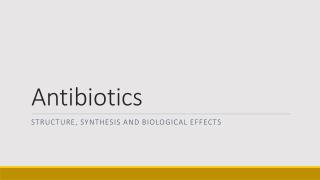 Antibiotics - . why we must use them wisely!. &lt; insert presenter details &gt; antibiotic awareness week 2014

ANTIBIOTICS - . from the greek: anti - against bios - life. chemotherapy. paul ehrlich use of chemical agent to kill

ANTIBIOTICS III. - Antibiotics iii. an important year in chemotherapy of systemic bacterial infection was 1935. although

Antibiotics - . defination. an antibiotic  is an agent that inhibits bacterial growth or kills  bacteria. so often

Antibiotics – Part 1: Chapter 38 - . what is an antibiotic?. a medication that kills bacteria or slows their growth are

Definition of antibiotics - . antibiotics are compounds of natural, semi-synthetic, or synthetic origin which inhibit

CHALLENGES IN REGULATING QUALITY AND RATIONAL USE OF ANTIBIOTICS - . alliance for the prudent use of antibiotics: