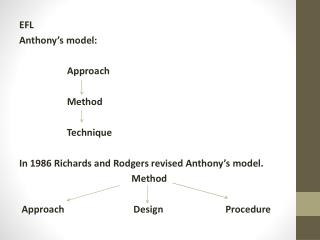 Method of Least Squares - . least squares. method of least squares : deterministic approach the inputs u(1), u(2), ...,

ANTHONY HOROWITZ - . by: matthew sutton. his family. his mom his mom took drugs and was happier in her later years. she

Approach, method and technique - . discussion. suppose: you are to travel to ecuator, what methods ( as many as possible

(Towards a) Modelling Platform for Biological Systems - . marian gheorghe university of sheffield. what the method does.

Case 6: Anthony - . patient history. anthony is a 55-year old lawyer. he has been suffering from voiding complaints for