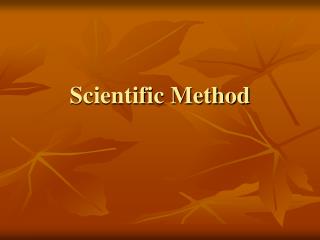 Scientific Method - . statistics and quantitative analysis. the world was covered by a flood. the story of the great

Finding Eigenvalues and Eigenvectors - . what is really important?. approaches. find the characteristic polynomial

Case 21 Review - . 1 st 9 weeks objectives. scientific investigation. ____ is the way or process of solving problems in

PART 1. SCIENTIFIC METHOD I. STEPS PROBLEM - always in the form of a QUESTION - Gather information 3. hypothesis

What is Robust Design or Taguchi’s method? - . an experimental method to achieve product and process quality through