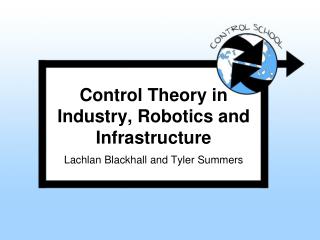 Control Theory in Industry, Robotics and Infrastructure. Lachlan Blackhall and Tyler Summers. Motivating Example. You walk into your classroom and turn your air conditioning on to a temperature of 24 degrees. Control and Robotics - . its all about the feedback. sensing – environment, position, pose or attitude, obstacles, etc.

Robotics and Control Technology Robotics with Lego Mindstorms NXT - Exploring robotics with the taskbot - level 1. what

Control Theory - . d action – time delays. derivative action. when there’s too much oscillation , this can sometimes

CONTROL THEORY - . session 1 – the concept of feedback. which block scheme represents the level control depicted in the

Control Theory - . d action – tuning. derivative action. when there’s too much oscillation , this can sometimes be