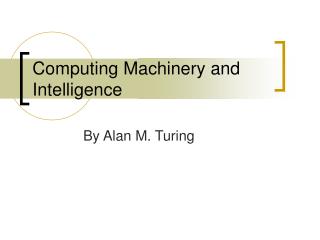 Computing Machinery and Intelligence - . written by a. m. turing summarized by kim kyoung-soo. the imitation game. the

Acting Humanly: The Turing test (1950) “Computing machinery and intelligence”: - Can machine’s think? or can

Artificial Intelligence and Computing Science - . october 19, 2012. ai in the seventies and eighties. a belated