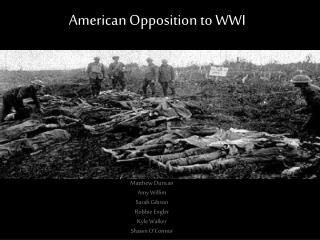 Opposition to WWI - . “if soldiers all were pugilists…”. opposition to wwi. many people in the u.s. were initially

American Imperialism Before WWI - . what were the causes and effects of annexing hawaii?. causes: america sugar growers

American Imperialism before WWI - . while many european states were busy creating empires in africa and asia, many

WWI and American Culture - . wwi culture. war of firsts technology combat weaponry countries had to adapt how they fought

American Involvement in WWI - . part 1: the homefront. wartime economics, and restrictions of speech. “he kept us out

Opposition to Bismark - . objectives: . what problems did bismarck face as chancellor of the german empire? how did

Opposition to Liberalism - . why did ideologies develop in opposition to classical liberalism? outcome 2.7. #1.

Opposition to Nazism - . nazi germany. this icon indicates the slide contains activities created in flash. these

Opposition to Liberalism - . why did ideologies develop in opposition to classical liberalism? outcome 2.7. #1. luddites.

The American Economy Since WWI - . objective: students will investigate the relationship between politics and economics.

The American Economy Since WWI - . objective: students will investigate the relationship between politics and economics.

Opposition - . why? how? formalities. why opposition? 1/2. better essays! the current degree project will undergo

Opposition - . e - describe multiple forms of resistance to the nazis . c - give reasons behind &amp; methods of

Opposition to the Nazi’s - . jeremy. opposition under the nazi’s. non-compliance with nazi regulations attempts to

Opposition to Bismarck 25.3 - . unrest in austria: coping with nationalistic movements. chapter 25.5. the decline of the

Opposition to the Nazis - . lesson starter: do you agree with the above statement? write down your ideas. ‘it was

An opposition to LOCUS - . david lee. unsupervised? poor dataset and how to take advantage of it with top-down