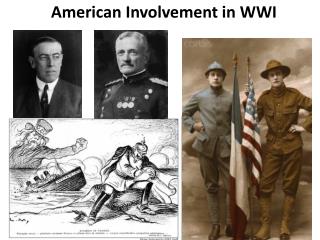 American Involvement in WWI. Part 1: The Homefront. Wartime Economics, and Restrictions of Speech. “He Kept Us Out of War”(but not for long). 1916 Pres. Election: Wilson won on a platform of peace. Wilson’s Wartime America:. Government Control of the Economy:

Imperialism and World War I - . imperialism. “the policy of extending a nation’s authority over other countries by

Bell Ringers - . what would it take for you to support america entering wwi?(remember that if we enter the war it could

U.S Neutrality in WWI - . when should the u.s go to war?. background. soon after the war began in 1914, president woodrow

World War I - . the americans, chapter 11. causes of wwi. 1. name the four causes of world war i. nationalism -devotion

The Home Front During World War I in the United States - . * today’s focus will be on the mobilization of the united