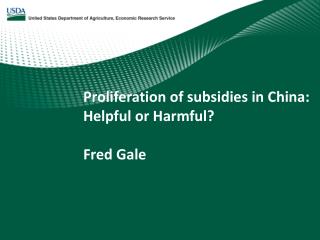 Proliferation of subsidies in China: Helpful or Harmful? Fred Gale

Proliferation of subsidies in China: Helpful or Harmful? Fred Gale. China’s spending on agricultural support has been rising rapidly. Since 2009, officials have also been raising support prices. Source: ERS analysis of data from China National Development and Reform Commission.

Proliferation of subsidies in China: Helpful or Harmful? Fred Gale

MGMS Databases - . cool, reliable resources just a few clicks away!. to find out how to use a database, click on it:.

Good and Bad Microorganisms - . review. what is the role of decomposers in the food chain? what are three different types

Capnography: Is it helpful? - . has been called the 15 second triage tool the newest vital sign? value lies in very

Taxes, Subsidies, and Tariffs: “Small” Country - . udayan roy http://myweb.liu.edu/~uroy/eco41. the effects of a