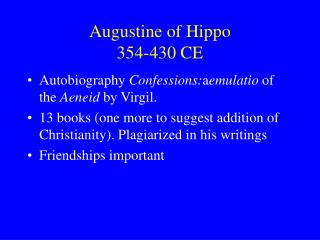 Augustine of Hippo 354-430 CE. Autobiography Confessions: a emulatio of the Aeneid by Virgil. 13 books (one more to suggest addition of Christianity). Plagiarized in his writings Friendships important. Beliefs. Sex is an interior state of mind Transmission of original sin “SOLVITUR AMBULANDO” St Augustine c 400AD - . walking is the first thing an infant wants to do and the last thing an

St . Augustine: Prayer of the HS - . breathe in me, o holy spirit, that my thoughts may all be holy.  act in me, o holy

Metacognition in Computation: A selected history - . michael t. cox bbnt cambridge. why metacognition?. “what then can

Advent in the Old Testament - . overview of the books about the kings. book 1 samuel 2 samuel 1 kings 2 kings 1