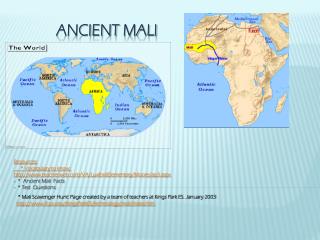 Ancient Mali - . *the student will study the early east african empire of mali by describing its oral tradition

Ancient Mali by Andrea laurel - . role the tape!. what is ancient mali?. ancient mali was located on western africa. were

Mali - . the spread of islam. introduction. mali was the next great power to rise in western africa after ghana. ghana

Mali - . by: nathan mooney. resources. mali’s main resource peanuts, but some gold has been found in northern parts of

Mali Empire - . all gold nuggets belonged to the king but gold dust could be traded . the currency was inconsistent.

Mali - . a story in pictures. the nation was called mali. mali became a legendary empire- a place of power and great

ANCIENT MALI - . 3 rd grade created by: denise ginter. the mali rap. chorus: a long time ago in history there was a