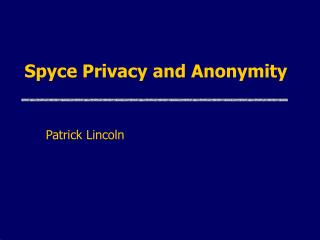 Spyce Privacy and Anonymity. Patrick Lincoln. Privacy. “The right to be let alone” [Warren & Brandeis 1890] More precisely: “The ability of an individual or organization to decide whether, when, and to whom information is released”. Example Motivation. Airline passenger databases

How Low Can You Go: Balancing Performance with Anonymity in Tor’ - . dc-area anonymity,privacy , and security seminar