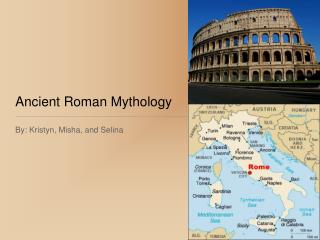 Ancient Roman Mythology. By: Kristyn, Misha, and Selina. How did the God’s come to be?. “ In the begining there was a deep nothingness known as Chaos. The out of this dark, empty space, two powerful beings slowly emerged” Gaia (motherly goddes of earth) Tartarus (Ruler of the underground) ANCIENT ALEXANDRIAN AND ROMAN MEDICINE - . jonathon erlen , ph.d . university of pittsburgh. before we discuss the

Chapter 8: The Rise of Ancient Rome Chapter 8.1: The Roman Republic - . learn about the geography and early settlement of