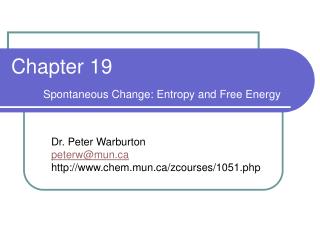 Chapter 19 Spontaneous Change: Entropy and Free Energy. Dr. Peter Warburton peterw@mun.ca http://www.chem.mun.ca/zcourses/1051.php. Spontaneous processes. We have a general idea of what we consider spontaneous to mean:

RADIOACTIVITY - . chapter 28. what is the radioactive ?. radioactivity is a phenomenon in which an unstable nuclei

Work and Energy Unit - . chapter 9. energy can change from one form to another without a net loss or gain. law of

Predicting Reactions - . presented by mr. mark langella ap chemistry instructor college board consultant 2009. why do the

Chapter 5 – Renewable Energy Resources - . what will we do when we run out of oil?. i. importance of improving energy

Chapter 6 Thermochemistry: Energy Flow and Chemical Change - . 6.1 forms of energy and their interconversion 6.2

Chapter 16 - . spontaneity, entropy and free energy. spontaneous. a reaction that will occur without outside