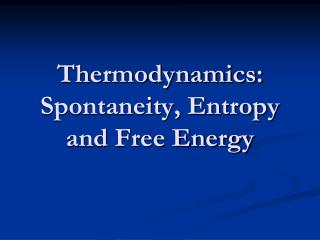 2. Thermodynamics of systems - . 2014. 2.1 the helmholtz free energy. in a not isolated system the entropy increases,

Chapter 2 The First Law of Thermodynamics - . ~chapter 1 was mainly concerned with macroscopic properties such as

Spontaneity - . i am a sleepless slowfaring eater maker of rust and rot in your bastioned fastenings, i am the crumbler: