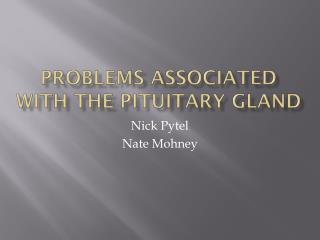 Problems Associated with the Pituitary Gland Problems Associated with the Pituitary Gland

Pathogenesis of diseases of the Pituitary, Pineal,Thyroid and Parathyroid glands - . trinity medical school dublin dr. b.

The Pathology of Pituitary - . doç. dr. a. işın doĞan-ekİcİ. anatomy. the anterior lobe develops from an

PITUITARY GLAND - . location. a small gland which lies in the hypophyseal fossa hanging from the hypothalamus, to which

Pituitary Gland - . dr. amel eassawi. objectives. the student should be able to: explain the hypothalamus as the major

The Pituitary Gland - . aka: the hypophysis. two glands: the anterior and posterior pituitary gland. hormones of the

DISORDERS OF THE HYPOTHALAMUS AND PITUITARY - . hormones of the pituitary gland. pituitary: the master gland. the