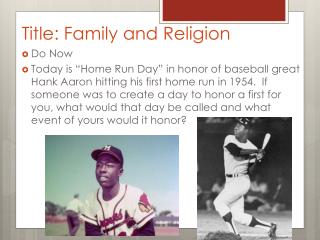 Title: Family and Religion. Do Now Today is “Home Run Day” in honor of baseball great Hank Aaron hitting his first home run in 1954. If someone was to create a day to honor a first for you, what would that day be called and what event of yours would it honor?. Agenda. Do Now

Jainism: The Religion - . jainism is an ascetic religion of india that teaches the immortality and pilgrimage of the

Freedom of Religion - . history of the amendment defining ‘religion’ the establishment clause the free exercise

RELIGION - . chapter 7. key question. what is religion and what role does it play in culture?. government impact on

The Sikh Religion - . by kayla m. hill introduction to the study of religion. sikhism is “a monotheistic religion that