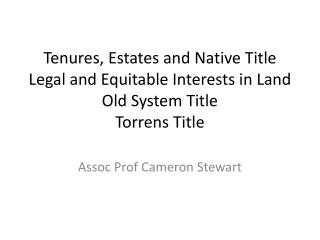 Land Rights and Native Title - . aboriginal events and issues. you will need to outline the important events over time.

Native Title - . by dom kannan. how to apply for native title. a ssisting people at any stage of proceedings under the

Native Title Issues - Introduction. wa also has long-established legislation that is managed to the highest international

Native Title , Mabo and Wik - . land rights and native title. in 1976 the fraser government passed laws to give

Estates in Land and Future Interests - . 1066 (norman conquest) concept of subinfeudation. the feudal structure. the

# and Title - . faculty name faculty institution. speaker disclosure in the past 12 months, i have not had a significant