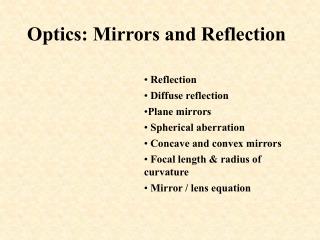 Reflection (Defined) - Reflection (noun) 1. the throwing back by a body or surface of light, heat, or sound without

Curved Mirrors - . take a look at a curved mirror. where can one find a mirror of this type in real life? the image you

EE 543 Theory and Principles of Remote Sensing - . reflection and refraction from a planar interface. outline. reflection

Chapter 22. Wave Optics - . light is an electromagnetic wave. the interference of light waves produces the colors

Reflection and Refraction - . reflection. most objects we see reflect light rather than emit their own light. a. b.

Reflection Of Feelings: Part 1 - . mcfc/mhc/cc residency 1. learning objectives. from this presentation, you will be