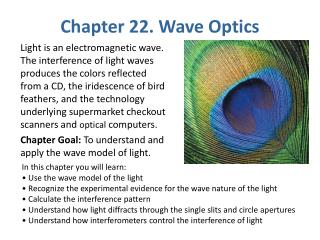 Chapter 22. Wave Optics . Light is an electromagnetic wave. The interference of light waves produces the colors reflected from a CD, the iridescence of bird feathers, and the technology underlying supermarket checkout scanners and optical computers. Wave Optics (Coincides with Ch. 22 in the book) - . christian huygens (xvii century) based on his observations of waves

Chapter 24 The Wave Nature of Light - . contents of chapter 24. waves versus particles; huygens ’ principle and

CHAPTER 22: Geometrical optics (4 Hours) - The study of light based on the assumption that light travels in straight

Chapter 35&amp;36 Interference and the Wave Nature of Light - . light as a wave the principle of linear superposition

CHAPTER 24 THE WAVE NATURE OF LIGHT

Wave Optics - . the light is a form of electromagnetic wave (radiation). but, how do we know? basic features of the light