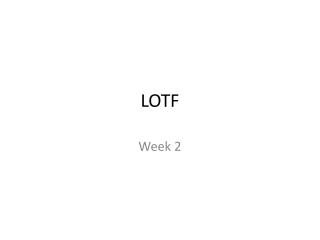 Allegory – LOTF - . mr. macdonald – lecture 1. allegory. an allegory is something used in literature, and art to

LOTF Vocabulary - . s car (pg.7). book sentence: “all around him the long scar smashed into the jungle was a bath of

LOTF Chapter 4 - . antithesis. based on pointing out the contrast in opposing ideas note the shift in their daily lives

LOTF Chapter One - . the sound of the shell. chapter one notes. ralph’s shedding of clothes is symbolic of the shedding

Themes in LOTF - . the littlest

LOTF: Chapters 7-8 - . objective : to observe differences in the characters as causes for their conflicts and to observe

LOTF: Chapter 9 - . allegory : a representation of an abstract or spiritual meaning through concrete or material forms.

LOTF Bonus Opportunity! - . create a pumpkin that represents a character or symbol from lord of the flies. write a

WAR &amp; LOTF - . why did golding write this novel?. how did golding view war?. lotf is an example of a literary

DO NOW: LOTF INTRO - . create a new document for do nows and write at least two sentences for each one if you were on a